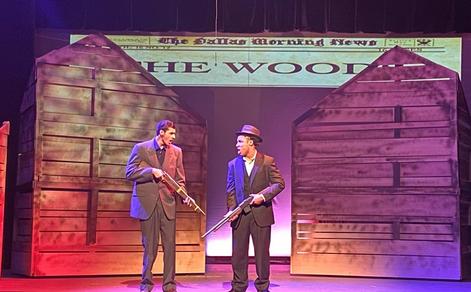 The Viking Theatre Company has grown exponentially over the past few years.  We have hosted the district and bi-district  UIL - One Act Play contests, created and produced the Jerry Baber Awards since its inception, and we produce shows that challenge the students to work hard, think outside the box, and challenge some of their ideals.  The sky is the limit for the future of the Viking Theatre Company!

Dulles High School has a long, rich history in the arts.  The award winning band, Dulles Dolls, the great orchestra, and choir are all on the rise.  The theatre department has joined these great organizations in being one of the best places for a high school student to receive the knowledge they need to succeed in the arts and to learn valuable life lessons.

Our department is committed to producing shows that range from classics to contemporary. Our shows are chosen to help educate and entertain the audience.  We believe that any reaction is a positive reaction because it means that the audience has been moved.

If we haven't left an impression on our audience then we have failed as artists.